Chuck Wendig runs flash-fiction challenges at his blog.  He gives a prompt, you write a story based on it and publish it on your blog.  I am going to take part in as many of these as I can this year to help get the muse flowing again.

The challenge this week was to bring up a random Flickr image and write a 1,000 story inspired by it.  The photo I chose was entitled That House by Arif Ünsal.  The link is https://www.flickr.com/photos/arifunsal/24319708705/ and the picture is below. 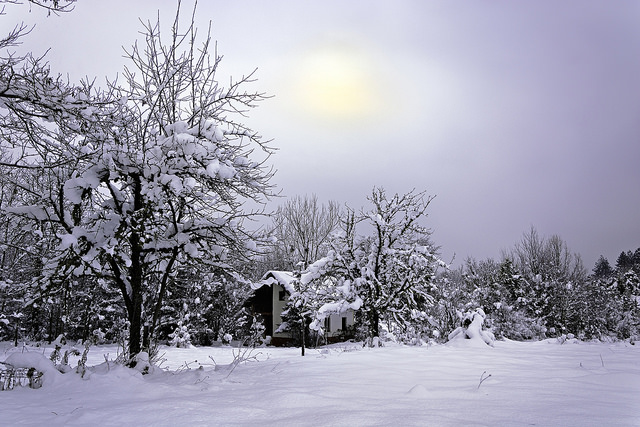 Here is my story.  I hope you like it.

We were out when the snow really got bad.  Jenny wanted to go to town and get some lunch.  She wanted a cheeseburger.

“I don’t want one of yours,” she said.  “You can’t cook for shit.  Besides, I want a margarita too, and there’s no tequila left.”

“That’s not my fault.  You know I don’t drink tequila.”

“Maybe you should start.  Might improve your cooking.”  She was always saying stuff like that, trying to yank my chain, get me going.  I ignored her, as usual.

“It’s supposed to snow this afternoon, babe,” I said, still trying to talk her out of it.  “You know I hate driving in that stuff.”

She wasn’t having it.  “Just a little snow,” she said.  Then she did that pouty thing with her lips that she knows I can’t resist.  “Come on, Seth, please?”

We live almost 20 miles from town, way out in the middle of nowhere.  The snow had started by the time we got to Jack’s.  We got out of the car and she stood there for a second.  The snow swirled and spiraled in the wind and dusted her hair and shoulders with a radiant halo of crystals.  She was beautiful.

“We better hurry,” I said.  “If this keeps on we’re going to have a hell of a time getting home.”

“You can’t rush a cheeseburger at Jack’s,” she said with a grin.  I just looked at her.  Her smile faded a little and she nodded.  “I know.  I’m sorry.  I just thought it would be fun.”

“It will be,” I said.  “I just want to make sure we get back before the roads get too bad.”

Fifteen minutes later we said our goodbyes to Jack and Sheila and came back out to the car.  The burgers had been delicious and she had loved her margarita.  She smiled at me.  I love to see her smile.

The snow was falling harder than it had been when we arrived.  The car was covered with it, not just dusted.  Had to have snowed an inch while we were in there.

We headed for home.  The roads were covered with snow and in town, drifts were already forming against the curbs.  I had chains on my tires—around here we put them on in November and don’t take them off until March unless God Himself comes down and says it’s going to be sunny—but I kept my speed down.  No sense tempting fate.

Jenny teased me about my driving.  She thinks I drive too slow anyway, and now she really started to hoot.  “Is that a turtle passing us?”

I spared her about a half second glance.  I could barely see the road for the snow blowing, and I didn’t want to take any chances.  “If it is, I hope he’s got his chains on,” I said.

It took almost an hour to drive the twenty miles home, but we finally made it.  I almost went off the road three different times, and by the time we saw the house in the distance, Jenny had quieted to let me concentrate.

We’d made it.  I parked the car and we went inside.  The fire had gone out, so I laid some new logs and coaxed it back to life.

I walked back outside to gather more firewood.  It was covered with snow, but I made several trips and stacked it by the grate in the mudroom to dry.  I made one more trip.  This one was just for me.  I walked halfway to the road, stumbling through the piled up snow, and turned back to look at the house.

It was the most beautiful thing I’d ever seen.

The snow had stopped falling.  The sun was glaring down out of the silver sky.  The ice in the trees and the snow on the ground were sparkling in the reflected light.  I could just make out the shape of the house under the trees.  I threw my arms wide and shouted.  No words, just a roar of happiness and contentment.

I walked back up to the house and went into the mudroom.  I scraped off my boots and tossed my gloves and hat on the grate by the wood to dry.  I hung my jacket on one of the hooks by the door and headed into the house.

“What was that all about?”  Jenny had gone into the kitchen while I fooled with the firewood and wandered around the yard.  I walked in and leaned on the counter beside her as she plundered in the cabinets.

“You’re such a caveman.”

“Like Thor,” Jenny said, “except he’s hot and you’re just a skinny little guy with a bald spot.”

I shrugged.  “You married me.  You weren’t so picky back in the day.”

“Maybe I should have been.”  She gave me a hug.  I kissed her.  She leaned into me for a few more seconds then pulled away and started looking through the cabinets again.  “You want some hot chocolate,” she said, “if I can ever find it?”

She opened it and took out a couple of packets of cocoa.  “What the hell’s it doing in there?”

As she made our drinks I went into the living room and jostled the fire around a bit.  She brought me a mug, steaming hot, and we cuddled up together under a blanket, sipping our hot chocolate and watching the snow start coming down again through the window.  We stayed there, enjoying each other, until we both dozed off.

It turned out to be a pretty good day after all.

2 thoughts on “Chuck Wendig: That House”

Ideas That Grow and Bloom

Observations of The Urban Spaceman

Watching the Earth. Not here to conquer. Promise!

WordPress.com is the best place for your personal blog or business site.